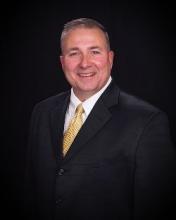 "It was while serving in the United States Marine Corps

that I first heard and responded to the glorious Gospel. While preparing to receive dental work during Basic Training, a soul-winning Navy corpsman won me to the Lord on the morning of August 22, 1978.

With the Lord’s limitless grace and through a series of life-altering events, culminating eleven years later with my Dad’s death, I was directed into a great, Fundamental, Independent Baptist Church in 1989 while serving as an Army Lieutenant. My new wife and I immediately rededicated our lives, grew in grace and were baptized. During March of 1991, while attending Pastor’s School (Hammond, Indiana), I surrendered to a call of pursuing full time Christian service. I left the military that July and was hired as the Associate Pastor to that “old country church” in Copperas Cove, Texas.

Later that summer, while attending the first “Fundamentalist Conference” hosted by Cornerstone Baptist Church in Colorado Springs, Colorado, I walked an aisle surrendering to a call to preach the glorious Gospel on August 22, 1991. It was exactly 13 years from the day I received Christ.

As the work continued to prosper in Texas, my Pastor was suddenly led to resign in September of 1995 and follow God’s call to start a church in Denver Colorado. I was asked to accompany him and along with another couple and 3 other single men, we started the Metro Baptist Church in Aurora Colorado in January 1996.

During the early Tuesday morning hours of the 1st of February 2005, while prayerfully preparing to start our annual Spring Sunday School Campaign, I yielded to a burning desire and answered the call to pastor a New Testament Baptist Church. On August 2, 2006, I was called as the Pastor to Hopewell Baptist Church South of Oakland, California."